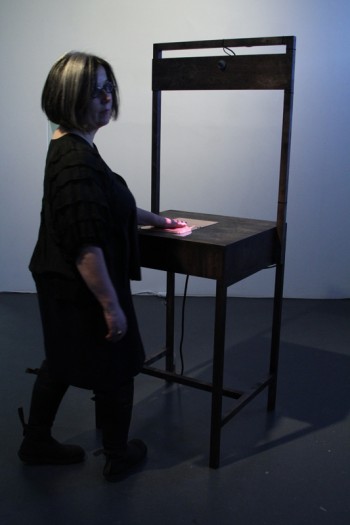 GSR2 was produced for the “Kosketusetäisyys – Within Reach” solo exhibition at the Gallery Sculptor, Helsinki between 2.1.-19.1.2014. The two installations in the gallery, GSR2 and the three untitled prototypes explored the agency of skin in the production of a participative performative event.

As the visitor places her hand onto the two copper plates, which serve as the galvanic skin reaction (gsr) interface, a video projection of a hand proposing a contact with the visitor’s hand appears. Essentially the behavior of the hand is affected by the changes in the skin conductance. The hand movements represent an escalating series in which more agitated gestures in the video reflect the increasing bodily affections, such as increasing skin humidity. However, the audience quickly learned to play with the projected hand by producing elaborate choreographies in contact with the copper plates and the projection, discovering that the extent of the skin contact had an effect on the projected hand’s behavior.
M2Hz web documentary